USC battles Missouri for the Mayor’s Cup and much more

COLUMBIA – You’ll see it down there, maybe. It may be propped on an equipment trunk or a spare stool, a small silver loving cup on a wooden base.

South Carolina and Missouri play Saturday with a lot on the line. The winner is 2-0 and 1-0 in the SEC, in sole possession of first place in the SEC East. A USC win means the Gamecocks return to Columbia for two straight home games and a chance to continue brushing the Top 25. A Mizzou win means the Tigers are halfway to their win total from a year ago with two more home games before heading on the road.

The winner also gets the cup, the “Mayor’s Cup” that was created in 2012, the year Missouri joined the SEC. Columbia Mayor Steve Benjamin thought it was a neat idea to battle for something, since the two colleges are each located in Columbia. 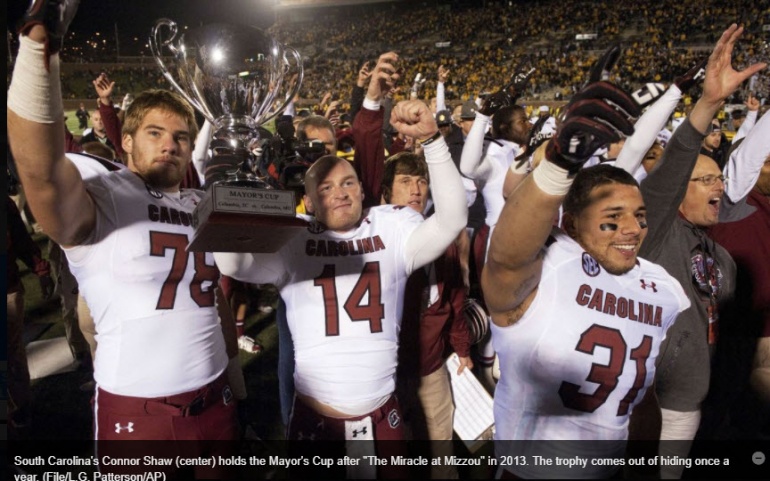 It’s a sidebar to the game. The winner will hoist it and then it will return to wherever it resides.

“It’s in our building,” USC coach Will Muschamp said of the Mayor’s Cup, claimed by the Gamecocks last year, 31-21, after a two-year stay in Missouri.

Do you bring up the Cup to the team this week?

“When the game’s over, we’ll talk about it,” Muschamp said.

It’s hard to create a rivalry off the cuff, especially when the schools haven’t played much. Missouri holds the distinction of being the only opponent to beat USC in multiple bowl games (1979 Hall of Fame and 2005 Independence). Other than that, they had never faced each other.

“It seemed to be a perfect time to start a new rivalry, and I called the mayor and he told us it was pretty cool, so it’s something fun,” Benjamin said. “I got to tell you what, man, it’s been exciting watching the rivalry decide this cup.”

The Cup is rather plain, but it doesn’t need to be fancy. For years, the winner of the USC-Clemson game received The Hardee’s Trophy, an eyesore that like the Mayor’s Cup, was put in a corner somewhere after the game and not looked at until the next year.

College football is full of wonderful trophies – almost any Big Ten game any time of the year has some talisman passed back and forth. None of those types of baubles ever came around South Carolina.

Benjamin wanted to change that. He actually bought the trophy and the universities were compliant with awarding it to the winner. The Gamecocks kept it in this Columbia the first two years but Missouri took it in 2014 after a 21-20 upset at Williams-Brice Stadium, a game that really started USC’s skid from a top-10 program to a muddled mess from which it’s only just beginning to emerge.

“We started it with the university holding onto it. Last time I saw it was in the locker room at Williams-Brice,” Benjamin said. “We thought it was going to be a pretty good idea, and obviously, SEC football, it’s not tough to start a great new tradition.

“It was downright exciting. My kids went crazy watching it happen. It’s a great new tradition but it needs to spend more time in Columbia, South Carolina.”

USC took it back last year at Williams-Brice and will pack it into the truck for the haul to Missouri this weekend. The Gamecocks and Tigers each want to win the game.

That’s the extent of competing Saturday, with the Mayor’s Cup thrown in.

“It’s been brought up more in the media notes than anything else,” Missouri coach Barry Odom said. “Obviously any time we got a chance to go compete, you want to be the winner. This one is another opportunity for us and we’re looking forward to go play.”

Andy Shain contributed to this story