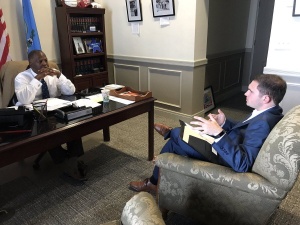 From streaming City Council meetings live online to establishing the Columbia Police Department’s Citizens Advisory Council and publishing an annual Internal Affairs Report, Mayor Benjamin has worked tirelessly to ensure the people of Columbia has the most open, transparent and accountable government possible.

That’s because he knows that government’s job is to serve the people and takes that responsibility very seriously.

Still, Mayor Benjamin is not satisfied with simply opening the doors to City Hall. He believes it’s not enough for government to be transparent if it isn’t engaged with the people.